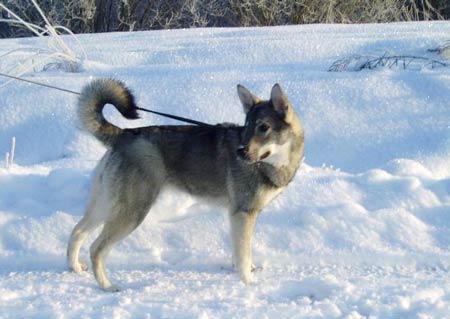 Piisi is very keen of barking and has a strong intrest in bears and elks. She is very tough with elks, follows them persistently and has a dense, good audible bark. Her nature is quite kind and soft and she is very obeydant at home. But when she is working with elks, the only way to get her in is shoot the elk or wait that elk goes to a lake.

Piisi has had one bear bark together with her grandfather, Ukkoteeren Raiku in autumn 2006. The bear was shot after barking. Piisi also has some elk kills.

15.12.2007 Hamina VOI1 90.5 pts (Championship of Kymen Elk Dog Club, ranked 3. of 41 dogs)
15.9.2007 Honorary mention in Lady Haukut (only women as directors) The Best Young Dog, VOI 1 82,5 pts, ranked 5 of 34 dogs
Piisi has also passed VAHI and HIRV-J tests in 2007 and is now FIN KVA-J=Tracking Champion.  She was the first grey dog (grey Norwei’s elk dogs and jämthunds) who got that merit. She has good opportunities to grow up a tough tracker and a bear barker
Piisi has given birth to one set of puppies. The father of the puppies is FIN EHCH/CH Rusmosan Kamu. 11 puppies were born 1.4.2007 and many of them have barked elks allready in autumn 2007. Piisi seems to be an excellent mother and more puppies will be expected in the future.