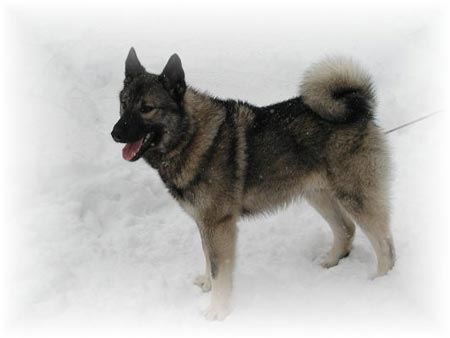 In the pedigree of Jääkäri there are many of the best bear barking families in Finland. It seems that Jääkäri has got his strong interest in and talent to bear barking from his parents. Jääkäri’s first bear touch was at bear barking test near St Petersburg in Russia.

Approval:
”The bear was tracked first in lead 2.5 km which after personal find 0.7.km from a swamp. On discovery place bark 1 min and turn out 2.8 km. At the end of test firm barking 113 minutes. The test was finished and another dog was loosed to the bark. Visible observe of the bear and dogs.”

Jääkäri has been in many accidents. He broke his leg when he was 4 months old. The leg was broken when he was wrestling with Raiku and fell down from cell. The leg was ironed for 2 months. After that Jääkäri had 6 elk touches which all ended succesfull kills after firm stand bark. The longest work lasted from early morning to dark evening. In elk hound tests Jääkäri succeeded well, too, and he was chosen to young dogs`championship on 1st Nov 2002 in Aura. Anyhow the hopes fell down right in the start when the elk was found too fast and too near. The rank was 10th in the end.

In bear and boar huntings Jääkäri has worked excellent alone and together with the ”master” Raiku. In addition to several elk kills and three bear kills alone, Jääkäri has several bear and boar kills when he co-operated with Raiku.

Jääkäri’s eager nature has caused several accidents with boars and bears. In a boar hunt in winter 2006 Jääkäri got a strong hit and approximately 30 stitches. He also lost one of his toes in a bear kill in autumn 2007. He had barked that bear alone 5 hours and followed him 20 km. The killing shot was already happened , but Jääkäri was a little bit too fast and went immediately too close to see the bear better and the bear had an opportunity to bite Jääkäri. Jääkäri’s working distance with wildbears is usually 1-2 meters.

After recovering from accidents, Jääkäri has been as eager to bark as earlier and is still going strong. In spite of his eager nature, Jääkäri is really nice and kind to the other dogs as long as his food is not taken or he is not attacted by another male dog. Jääkäri likes everybody and is also quite obeydant, if he is not barking an animal at that very moment.